3D GIS-Making IT Work Harder than Ever 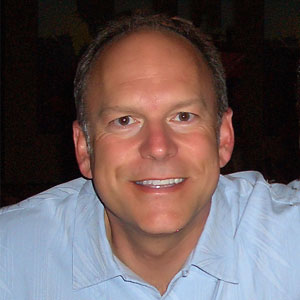 A few years back, I took a trip from my office in Irvine, CA to the Desert Research Institute in Reno NV to explore opportunities for using Virtual Reality and Geographic Information Systems (GIS) to map in realtime the progression of wildfires. Using an indoor twelve foot “cube” outfitted with 3D projectors and wearing 3D glasses I could visualize a computerized model of the actual terrain. The system applied real-world weather conditions to model a virtual fire’s progress and reaction to external factors such as weather and firefighting. The room was abuzz with banks of servers and large equipment to accomplish both the incredible computer processing and to trick the user’s senses into believing they were standing on a ridge overlooking sage brush and trees as the fire took off.

"Raising public awareness through the use of 3D GIS is gaining traction, allowing engineers and scientists to better communicate risks"

That was in 2009 and much has changed in the world of 3D and GIS. Today we are not simply trying to model a hillside or valley and produce photorealistic vegetation to immerse the user. Today we are creating entire cities in 3D, complete with real photos of facades and rooftops. We are using Augmented Reality (AR) goggles to immerse the user and allow them to explore the virtual 3D environment while providing real-time analysis of “BIG” datasets to enhance decision making.

Spurred on by the video gaming industry with such products as SimmCity, the virtual environments being developed for today’s smart cities will lead to a revolution of technological advances in IT from the ground up. SimmCity, which began with very simple graphics in 1989 became the most popular video game through 2012 and is now using full 3D multi-player graphics feeding the 3D creations over the Internet. While it may seem that such games are mere toys to play with, they actually paved the way for the development of many of the tools and IT innovations we use today.

Kevin Devito, CEO of CyberCity 3D, Inc. writes, “All cities desire the opportunity to leverage their GIS data assets in a 3D environment.”

Historically 3D GIS was the most IT resource intensive activity in the engineering and design field. Developing 3D terrain models to perform simple volume calculations would bog down even the hardiest of mainframe computer systems. In today’s world, we see wide spread use of technologies like LiDAR (laser scanning) both from the air and ground based mobile platforms. Here at Baker we depend on our IT infrastructure to support development of massive 3D point clouds with survey grade measurements taken of every centimeter of a city as our Mobile LiDAR truck drives down each street (think Google Streetview at an engineering level). The transport, processing, analysis, and display of this data is leading to ever expanding requirements on the IT infrastructure. 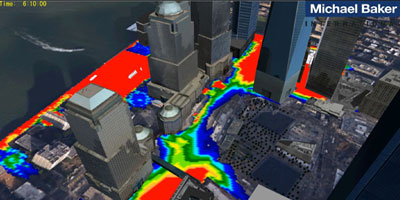 Even more data to support and enhance these terrestrial models comes from aerial and satellite imagery. In the next several weeks, the FAA promises to release to the White House its proposed guidelines for the use of small drones over the U.S., and satellite companies are racing to provide almost real time photography and other remotely sensed data from several new constellation of satellites the likes of which we have never seen. A San Francisco startup called Planet Labs has a team of 40 working to deploy 131 shoebox sized satellites in the next 12 months. These “mini” satellites will give a comprehensive picture of the entire Earth’s surface almost daily, with pictures sent back for analysis and inclusion in these 3D models within hours.

While progressing at the speed of light, these new developments and the availability of data have stirred up controversy on both data privacy and data security, again putting significant pressure on IT to advance. Thomas Immel, a scientist at the Space Science Laboratory at UC Berkeley says, “These new capabilities open up a Pandora's box. What is clear is that 10 years from now we'll be having another argument over the next implementation of technology that we can't even imagine.”

Further development of these 3D city models is being spurred ahead through new software, such as Esri’s City Engine which can take traditional 2D datasets, such as building outlines, tree locations, and underground utilities, and extrude these elements into the third dimension. This makes the development of these 3D virtual environments more cost effective for municipalities to create and will serve as the basis for continual evolution of the data as it is improved by users and projects over time.

The development of these 3D models in and of themselves only places the IT burden on the few companies and agencies who endeavor to produce them and keep them constantly stocked with current information. There is a whole new side of the relentless march forward in 3D implementation coming from the information consumer. Where once relegated to the dark cubes of engineering offices and research institutions, today’s user may be consuming these 3D environments or performing spatial queries using real time 3D animation on a laptop, tablet, or even their smartphone. Offices of architects, engineers, planners, and contractors in the field are all now using 3D tools to design and build the cities of the future. All the information they consume in making decisions and developing their designs will likely come from web services fed through ever expanding and speedier networks. 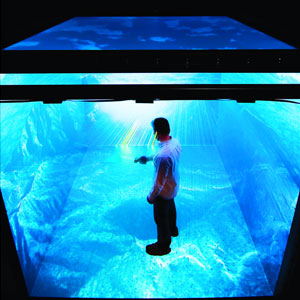 Niels Lehmann of Urban Synergy Group is quoted that “Turning Zoning laws with CityEngine into vivid three dimensional visualizations, is drastically changing the way we understand and plan our sustainable future environments.”

Jack Dangermond, Esri’s President says, “Future Cities will be much smarter. Everything will be measured in real time and in fine detail through the deployment of sophisticated arrays of sensors.Cities will increasingly make their information available as open geospatial services”.

In my own industry, Baker is using 3D GIS and computerized flood modeling to analyze and communicate to decision makers and the public the effects of flooding around the World Trade Center site in NYC. Tom Ryan, stormwater modeling engineer for the WTC project says that “thousands of pages of numbers and tables cannot adequately communicate the flooding dangers from storms and sea level rise”. He goes on that “Raising public awareness through the use of 3D GIS is gaining traction, allowing engineers and scientists to better communicate risks”.

In as little as two generations we have seen the shift in the ways that people exchange information. Handwriting gave way to typewriters, and then to word processors. Our word processors became connected and we developed email, ultimately with photo and video attachments. Now people can use interactive real-time 3D graphic simulations connected to BIG data to communicate information. Furthermore this information can be sent directly on demand to anyone with an Internet connection. These virtual environments are changing the way we conduct business today and is a major catalyst for the exponentially growing global information infrastructure.

The New Face of Mobile: Yes, It Should Have a Face

The Epic battle for the Digital Wallet