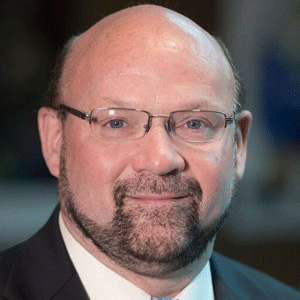 For over 50-years Oral Roberts University has given students’ from over 160 different nations around the world three distinct challenges while earning their degree.

1. ‘Make No Little Plans’ while attending ORU.
2. Graduate with a purpose to ‘reach into every person’s world,’ no matter what vocation you choose.
3. Develop your ‘whole person’, which includes the spirit, mind, and body.

Ironically, as the CIO at ORU in a global and digital era, I was born in the same year that Chancellor Oral Roberts made the proclamation of building the university with these distinct challenges (1961). 54-years later, I am privileged to sit in the same office where Oral started these initiatives. Our current day global and digital society now allow digital electronics to travel slightly faster than the speed of light -- exponentially accelerating the ability to reach into every person’s world.

The cliché that the world is getting smaller is now a reality from a speed, space, and time perspective. As we accelerate the methods of reaching into every person’s world within in a digital society, we are capable of moving curriculum and students in what once was only a phrase -- ‘at God-speed’; which is the speed of light.

The realization of this iconic 50-year vision in a digital society is being accomplished through ORU’s Globalized Information and Education Systems (GIES). The GIES includes geospatial back-office interfaces to accommodate students from every corner of the world. However, the new front-end platform is called OneCampus, Global Education Network™ (GEN). OneCampus GEN is designed with all the back-office components referred to as Geovision™ technologies that accelerate the delivery of education while spatially connecting every global citizen to ORU’s award winning Whole Person education. No matter where a person is located in the world, OneCampus™ provides the potential delivery of adaptive, micro and/or Nano-modules of learning to meet every student’s particular need within their space, their time, and their location in the world.

ORU can literally ‘Flip the University’ to every corner of the earth, and reach into every person’s world at an accelerated rate. We are now capable of intelligently teleporting education around the world in Nano-byte style -- to the right person, at the right time, with the right education, 24x7x365.

The cliche that the world is getting smaller is now a reality from a speed, space, and time perspective

ORU’s OneCampus GEN™ capabilities recently garnered the attention of the United Nations, who invited Oral Roberts University to present at the 2016 InfoPoverty Global Summit on April 14-15, 2016, to present the vision that ‘digitally’ reaches into every person’s world.’ The outcome is to accelerate the United Nations 2030 Agenda, which includes -- “A world with universal literacy to achieve dignity and freedom for everyone. A world with equitable and universal access to quality education at all levels, including health care and social protection, where physical, mental, and social well-being is assured”. Who could have known that Chancellor Oral Roberts was fulfilling a United Nations 2030 agenda/vision in the year 1961?

ORU’s OneCampus GEN™ recently teleported over 520 hours of academic coursework to-and-from locations around the world through our teleportation robots called Geo-teleportation robots. The Geo-robots shown in figure-1 allow students and faculty to teleport both students and education at the speed of light to-and-from any location in the world, into the Tulsa, Oklahoma Campus. In Figure-2, Dr. Seth Ablorh, a medical doctor from Accra, Ghana is shown on the Geo-robot Segway model with our College of Nursing Dean, Dr. Kenda Jezek and Dr. Albert Essandoh, who are connecting between Tulsa and Ghana on the Geo-robot table-top model. During this first teleportation Dr. Ablorh said ‘It may not seem like a big deal for ORU, but for the people of Ghana, this was like watching the first man to land on the moon.’ 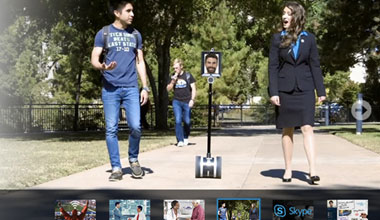 Plans are now in place to leverage ORU’s Geovision technologies to teleport critical micro-modules, and Nano-modules of nursing intelligence to the hospitals in Ghana from ORU’s new Global Learning Center and Geo-robots. Other countries being included are South Africa, Pakistan, Nigeria, The Republic of the Congo, Russia, and Canada. ORU’s vision became a reality through tight-knit relationships with education vendors who also have visions of reaching the global and digital society. These vendors include Brightspace (D2L), Steelehouse Productions, EON Virtual Reality, Revolve Robotics, Double Robotics, and rSmart’s OneCampus.

These vendors allow our curriculum to become globalized, modularized, and teleported to any location around the world in multiple formats including digital online programs, tele-presence, virtual reality, and content packets that can span the spectrum of being teleported in a micro-level to being mass-produced on tablets and e-Readers in areas where Internet connections do not exist. These vendors alongside ORU’s OneCampus GEN™ with Geovision™ technologies is a revolutionary Global Information and Education System (GIES) that closely match the GPS, GIS, and Geospatial Information Systems for other industries.

As education entities like ORU develop Global Information and Education Systems (GIES), Geospatial Information Systems, and Global Positioning Systems (GPS), education will become mobile, fluid, and transportable to meet the goals of reaching every person’s world, and the United Nations’ 2030 vision of equity and freedom for everyone to become literate.

ORU has completed the first step to prove that education can make paradigm shifts and become leaders amongst industries. In 2015, ORU utilized their vast information system knowledge and became the first university to take data from a wearable watch and leverage wireless and cloud technologies to transport pieces of fitness intelligence (data) directly into student grade books of major ERP/SIS/LMS systems. This Geovision™ technology design allows students from anywhere in the world to wear the technology anyplace in the world, and complete a portion of their Whole Person education; while staying focused on their ‘big plans’ of reaching into every person’s world. What appears to some as ‘mystical’ or a ‘data phenomena’ of globally transporting data into thin-air; is really about Nano-sizing educational data in a geospatial data-structure. The science, behind this ‘data phenomena’ was the initial intent of Geovision™ technology design. This same concept spanning educational courses, programs, and degrees will ‘revolutionize’ how students will digitally ‘meet, see, touch, take, and filter’ education in the future. Imagine Nano-sizing degrees into pieces of ‘intelligence’ that are digitally teleported to the right person, at the right time, in the right corner of the earth?

Summary: As the world considers Nano-sizing degrees into ‘just-in-time’ digital pieces of intelligence to anyone-or-everyone in the world, we will break open the paradigm of cybernetics into a potentially new field of study. This new field of study is code-named Geonetics by ORU. Geonetics leverages the art and science of coordinating digitization of previous generations of knowledge and technology to reach into every person’s world for global improvement. Geonetics is initially considered the digital phenomena that aligns and connects people via geospatial and global information systems on a global scale, to improve the education and well being of humanity.

Disrupt Your Legacy Application Portfolio to Improve Security And...

Why a Credentialing Strategy Must be Part of Your Digital Strategy

The Convergence of IT with the Internet of Things Innovation

It’s On People: The Undeniable Cultural Impact in a Digital...

A Promising Road Ahead for Insurtech

Bolloré Logistics Australia becomes a global leader in the use of...